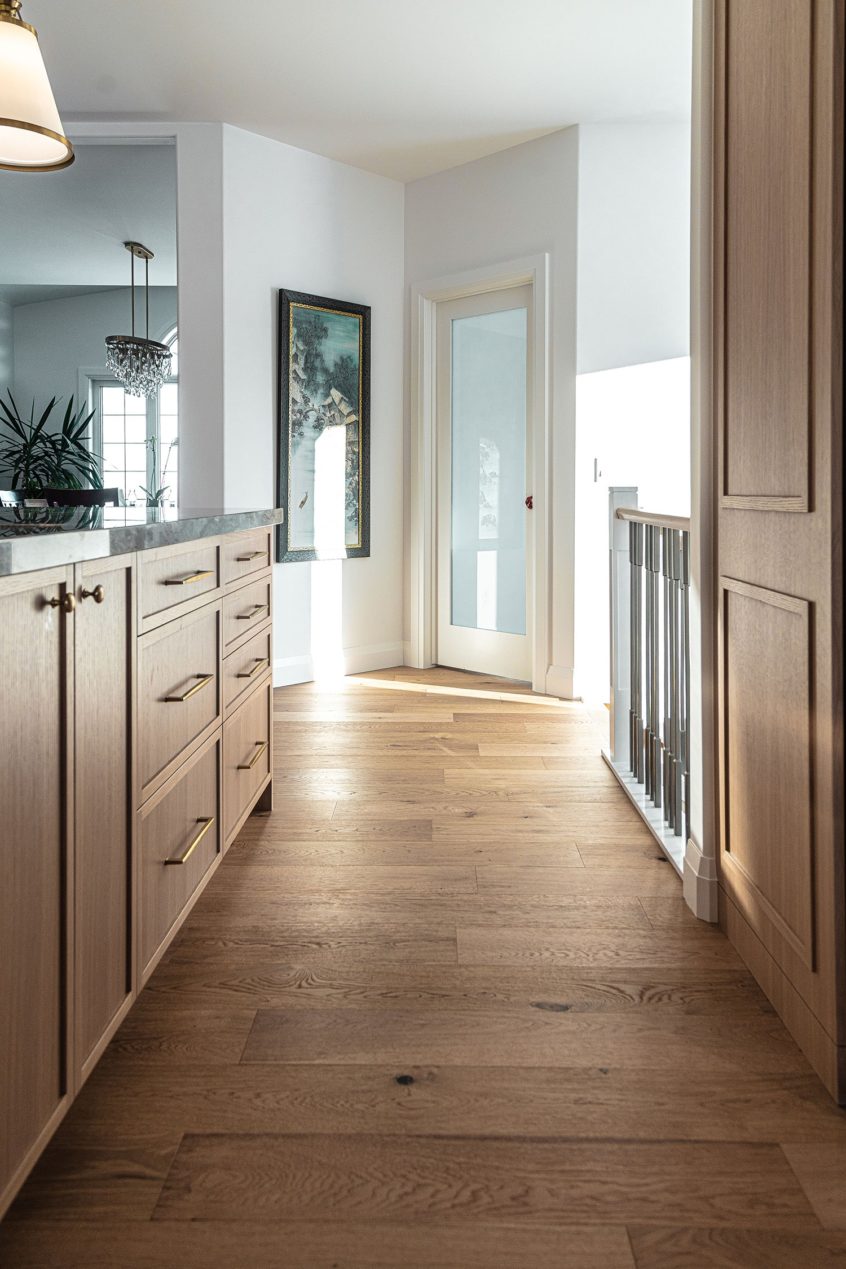 We are excited to be able to showcase this award-winning kitchen, designed by Anastassiya Vassilyeva of MKL Design Studio in Calgary.

Born in Kazakhstan and trained in Toronto, Anastassiya brought a very interesting set of skills and talent to the (kitchen) table on this project. Having designed extensively for the hospitality industry – i.e. hotels and restaurants, Anastassiya had tackled many a commercial kitchen. “Back in 2014 and 2015, Commercial and hospitality was the bulk of my work. When it’s a restaurant or commercial kitchen, it’s a business. So understanding the workflow of the chef’s team is critical for operating efficiency.” Then, she says, the aesthetic is built around that, considering the feel the client wants to achieve.

“My preferred aesthetic is minimalist. I like an uncluttered look that is timeless. Like naked white oak, and less is more. So, not too many textures and colours competing for attention. But my process is tailored to the client, and I don’t push my tastes too much – I really zero in on their personality.”

The homeowners were a soft-spoken, long-married couple who had lived in this home many years, and who intended to continue living there long-term.

The woman of the household, who was quite tiny in stature, was an excellent cook. The couple also loved gardening very much, and had a large garden and many indoor plants. The renovation was intended for their own ongoing use, not to sell or showcase the home.

Fortunately, the couple had a developed basement, and a lovely RV parked on the property – so they were able to make use of these spaces to continue cooking and living during the renovation, which took about 14 months from concept to completion.

It was during the quieter time of the 2020 pandemic that the homeowners felt it was high time to address a kitchen that was just not working well enough for them.

First, there was a real lack of storage and workspace. There were insufficient working countertop areas. Small appliances were difficult to store and retrieve easily, in particular a heavy juicer that was used almost daily. And, the pantry was also in a corner and had an awkward door.

Second, it lacked light. There was only a small window without a view, and the artificial lighting wasn’t creating much brightness.

Third, other elements were showing age. The appliances needed replacing. The floors were dark. And because of the large collection of indoor plants, the floors often got wet and tended to show blush marks.

So overall, the feel of the kitchen was quite closed in. The couple wanted to make it feel larger and bring the “outside in”.  Since they also had a beautiful backyard garden, they hoped to be able to view it when working in the kitchen.

Kitchen – “Before” the renovation:

As Anastassiya explained, “The first step is appliances, because everything has to be designed around fitting them.” So she was grateful the couple made this decision early on, and that supply chain hold-ups, prevalent at the time, would not cause delays.

She talked extensively to the homeowners about the kitchen workflow. Realizing that much more space was needed, the entire design was re-imagined for quick, easy access to all the kitchen tools required.

As any commercial chef will attest, cleaning is as much work as cooking, so considering the ease of both contributes immensely to a kitchen’s usability.

“Initially they considered two-tone cabinetry, a patterned backsplash, and crystal pendants over the island. When I explained the difficulty of cleaning between a tile and stone backsplash, the busy look of two-tone cabinets, and the time required to shine individual crystals, they understood that this would cause unnecessary headaches and a more dated look. Because we had a gorgeous stone countertop, we let that become the focal point in the space, and the rest of the kitchen’s aesthetic simply supports it.”

While the clients invested a great deal in the renovation, Anastassiya says, “It was great to find an engineered hardwood floor that gave just the look we wanted, and was very durable, but at the right price point.” The floor was a light, natural oak from the Timeless Scotia Collection, and the cabinet makers, Sunview, were able to coordinate the look. “While engineered floors have many layers of finishes that prevent an exact match with the cabinets, we were able to achieve a look where they tied together beautifully.”

Kitchen – “After” the renovation

When the kitchen was complete, it was bright, elegant and restaurant-level functional. It also won a CICBA (Calgary Inner City Builders Association) Cube award for the best kitchen as part of a total renovation under $200K.

Says Anastassiya, “They are a quiet couple who don’t usually make a big show of things. So it was really done just for them, not for showcasing or selling the home. But they were so happy with it, and they did not hesitate for us to come in and photograph it.”

“For me, it was a fantastic application of commercial-level kitchen functionality and aesthetics. Although I was very happy to be recognized, it simply felt wonderful to do what I love doing!”